They Called Her Molly Pitcher, by Anne Rockwell 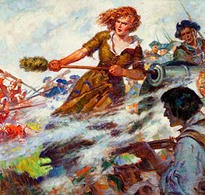 A Pennsylvania housewife follows her husband to the Revolutionary war front, and makes a name for herself on the battlefield.


Molly Hays was a heroine of the Revolutionary War. During the Battle of Monmouth Courthouse on June 28, 1778, Molly carried water through the danger and din of the battlefield to the Colonial troops, fighting in +100 degree heat against a larger and better trained British army. When her husband was wounded, she assumed responsibility for firing his cannon through the rest of the battle. Her service was recognized by General George Washington.
Posted by Unknown at 9:14 PM